I've often seen references to Shadow Shot Sunday and have sometimes strayed onto the blog to admire all the wonderful photos.
Today -  looking at photos I have taken  - was a  Sunday shadow opportunity too good to miss!
We were up at 4.45am and the sun rose illuminating lots of spiders webs on the washing line....
street cleaners - people and vehicles  - were visible in good numbers, and the local pizza shop owners were polishing their windows...
after a brisk bracing walk in the sunshine we arrived at our destination, having passed quite a few locals waiting in anticipation or shuffling  slowly, drawn magnetially to the edge of the pavement.
We could hear the fabulous steel band playing to a gathering throng of bleary eyed but cheerful camera clad onlookers munching on free bacon butties or veggie sausage sarnies!
The buzz grew louder as the first wave of police notorcycles passed.....then a convoy of large, loud  lorries.... 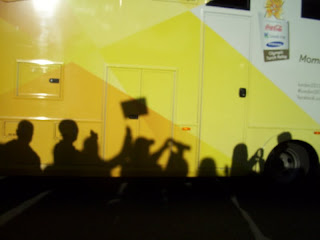 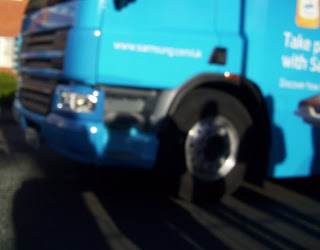 ...and eventually the Olympic Torch! 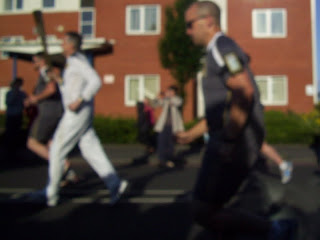 ...its a bit of a blurry action shot...but as I looked at a following photo I spotted something right in the middle...and by the power of digital zooming..... 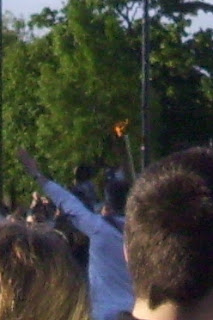 ..here's the flame travelling through Birmingham on day 44 of the torch relay!
What an experience - and all over before 7.30am!

Now to carry on with normal Sunday routine...a bit bleary eyed,
though I did start a crochet flower at 6am...not sure when I'll finish it!

A moment to be remembered for ever :o)

How exciting, Ali! We missed it when it passed through our little corner of Yorkshire last weekend, but I know people say it's quite an emotional experience. Liz x

well I was disappointed that I missed the torch going through my home town but then a few days later saw it completely by accident going through Cockermouth, we were there for Woolfest.....oh my, both events were quite something...lucky me!!! 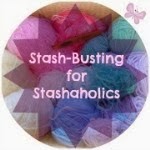 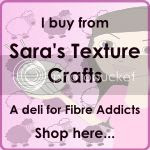